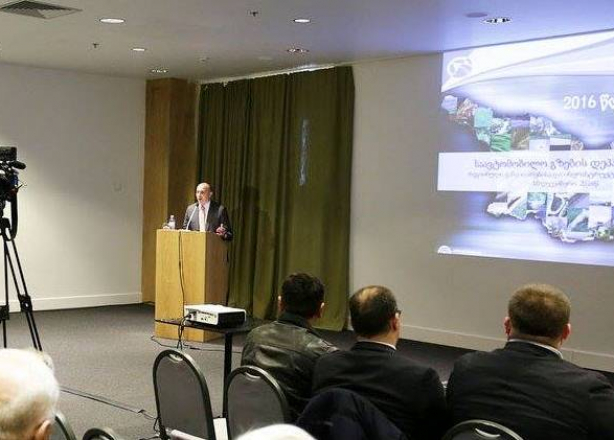 Today, an event dedicated to Road Builder’s Day organized by the Society of Road Builders of Georgia and Roads Department was held at a hotel “Holiday Inn Tbilisi”.
Speakers of the conference, held within the arrangement, talked about a tradition of Road Builder’s Day and achievements and problems existing in the road sector.
The event was attended by Minister of Regional Development and Infrastructure of Georgia Zurab Alavidze, Chairman of Roads Department of Georgia George Seturidze, Deputy Chairmen of Roads Department, Chief of the Society of Road Builders of Georgia Tamaz Shilakadze, representatives of road sector and other invited guests.
Minister of Regional Development and Infrastructure of Georgia Zurab Alavidze delivered a speech at the event. The Minister congratulated road builders on their professional holiday and discussed the future challenges. Zurab Alavidze emphasized the necessity of performance of four-point Governmental reform plan, a significant part of which is about the development of road infrastructure.
First Deputy Chairman of Roads Department Nugzar Gasviani presented the report about the results of 2016 and plans for the coming year.
The earliest celebration of the Road Builder’s Day was held 49 years ago by George Robitashvili (George Robithashvili was the head of road sector in 1939-1984, for 47 years). Since 1965, meetings for summarizing of the past year’s results, with representatives of the regions, became the form of a tradition, while since 1980s it has become an official professional day.