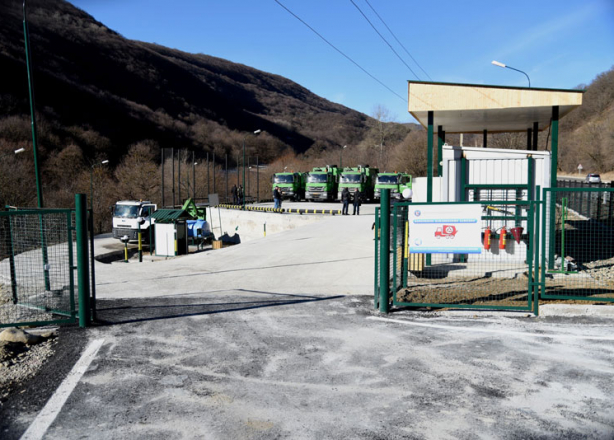 Waste Transfer station arrangement works for Tsalka and Manglisi municipalities has been completed.

“Solid Waste Management Company of Georgia”Ltd in coordination with the Ministry of Regional Development and Infrastructure of Georgia accomplished the Manglisi and Tsalka landfill closure works in compliance with EU Standards and arranged Waste Transfer Station. Zurab Alavidze, the Minister of Regional Development and Infrastructure of Georgia and Giorgi Shukhoshvili, the Director of the Company together with the representatives of local self-government visited the new transfer station of Manglisi and Tsalka to check the carried out works.

Municipal landfill of Tsalka and Manglisi was transferred to the possession of Ltd. “Solid Waste Management Company of Georgia” in 2013. At the time, the state of the landfill was horrible: waste was being disposed unorganized at the landfill perimeter, operational standards have been neglected, no ecological and sanitary norms were observed, and control and sanitary supervision of the landfill perimeter was not followed. The landfill territory was not fenced, thus, the nearby population as well as domestic animals could easily reach the disposed waste on the landfill territory, which raised a risk of infection contamination among the poultry, cattle and municipality population. As a result of all these, operation of the landfill was dangerous for the environment and nearby population.

“Solid Waste Management Company of Georgia” Ltd has implemented closing works in the old municipal landfill of Manglisi and Tsalka in compliance with standards and arranged waste transfer station in Toneti village (district of Tetritskaro) . This means, household waste collected by municipalities will be compressed in big containers and then will be transported regularly to the next rehabilitated landfill (Marneuli). Waste transfer station project was financed from the state budget. Project cost amounted to 427 933 Georgian Lari.

During the visit, special machinery equipment for Waste transportation was given to the Kvemo Kartli Region by Zurab Alavidze , the Minister of Regional Development and Infrastructure of Georgia. Waste trucks has been purchased by Municipal development fund of Georgia with the financial support of European Bank for Reconstruction and Development (EBRD). Within the project, 17 waste trucks will be delivered in Kvemo Kartli region in Total.