Dusheti House of Culture will serve over 9 thousand beneficiaries 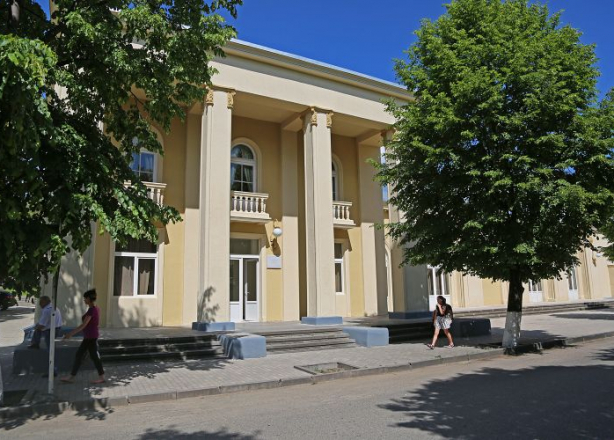 Dusheti House of Culture will serve over 9 thousand beneficiaries

The Minister of Regional Development and Infrastructure of Georgia- Zurab Alavidze opened renovated House of Culture in Dusheti, along with the Minister of Culture and Monument Protection of Georgia – Mikheil Giorgadze. The event was attended by the Deputy Minister and Local Government representatives.
Dusheti House of Culture will serve over 9 thousand beneficiaries during this year. Within the frames of the project lighting, central heating, ventilation systems were installed, new WCs added. Also, interior was refurbished - replaced with new curtains and armchairs, new flooring installed. Yard and exterior was also refurbished. Voice recording new studio and make up room was set up and new inventory placed.
According to the statement of the Minister of Regional Development and Infrastructure of Georgia - Zurab Alavidze, opening of the House of Culture is very important. Young generation will have possibility to learn skills in different spheres of culture. At the same time local population will have additional employment opportunities.
“It is worth to maintain that nowadays Dusheti has a modern House of Culture where all the conditions are for talented young people to study and be engaged in various interesting activities. We have here conducted wide scaled works and now it is possible to organize different events and festivals ".
The rehabilitation works were financed from the regional fund. The cost of the project equals to 700 000 GEL. 40 persons were employed in the project.
Within the frames of the opening ceremony of the House of Culture, presentation of a book – describing Dusheti was held. The concert, with the participation of local folk ensembles concluded the event.