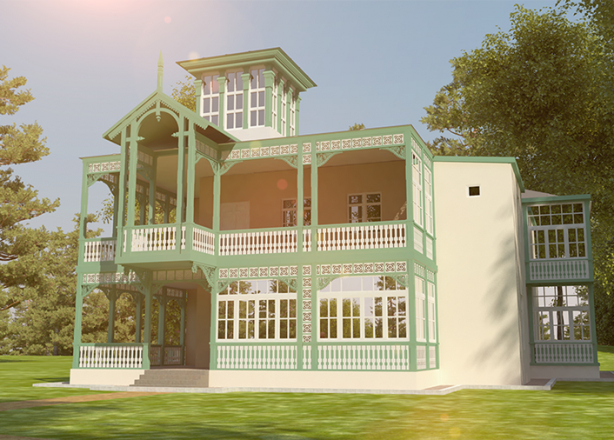 Ministry of Regional Development and Infrastructure of Georgia kicked off several infrastructure projects in Abastumani. Currently, historic houses and a Baghdadi-Abastumani road are being rehabilitated.
Rehabilitation project is funded by the World Bank and its cost amounts to GEL 3,7 mln.
The project, implemented by the Municipal Development Fund of Georgia, covers rehabilitation and restoration in their original forms of 18 houses constructed in 18th and 19th centuries.  The project also covers fortification works on couple of houses. The houses which are distinguished by their rare architecture, have delicate decorations and gradient roof. Rehabilitation of historic houses will be finished by autumn, 2019.
In addition to this porject, the Fund has already announced bidding on rehabilitation works of National Astrophysical Observatory named after Academician Evgeni Kharadze.
The project covers full rehabilitation of a large Telescope AZT – 11 building, where an information center for visitors, café, working area and renovated library will be accomodated. The project also covers improvement of the central territory of the settlement nearby the main building to be designed, restoration of a cable way, construction of toilets and parking lots.
The Observatory was established in 1932 by Evgeni Kharadze. It was the first Alpine Astrophysical Observatory in the former Soviet Union. Main directions of research at the Observatory are galaxies, stars, solar system errors and upper atmosphere.  Around 10 thousand tourists visit the Observatory during a year. As of today, 125 people are employed at the Observatory.
Municipal Development Fund is also planning rehabilitation of water supply and water discharge systems and implementation of urban renovation project in Abastumani by 2019 – 2012.
Roads Department of Georgia started reconstruction of Baghdadi-Abastumani road. Initially, a 3.2km  long section is being rehabilitated. The road is important as it reduces time and distance of travelling from the central part of Georgia to the Turkish border (by around 90 – 120 minutes).
Implementation of infrastructure projects in Abastumani will promote attraction of tourists to the region, which, in turn, will result in job creation for locals.